Posted by nyoroppyi at 01:44 No comments:

Before the departure for Bangalore, I'd like to review PGP 2017 briefly.

・1A  469.5(8)
Although Shikaku is one of the most good puzzle for me, I was stuck on Recto 3. As anticipated, Irregular Doppelblock were tough puzzles. Remaining was 7,8 minutes after solving All or One 1, but I managed to finish using some assumption on All or One 2. I felt the importance of not giving up.

・2A  532.5(4)
2A consisted of just 5 puzzles, so it was tough puzzle round. As a result, I got the highest score on this round.
I could smoothly solve Tapa and Nurikabe. Magnets was very tough and I erased it all one time, but I could solve it with about 20 minutes, finding logical path of it. I couldn't find the breaking of Oasis, so I entirely relied on trial and error.

・3A 420(7)
I couldn't solve Star Battle using more than 15 minutes. I didn't take care of it because I thought I was just unlucky, and almost good at the other 11 puzzles. Myopia were very fun for me.

・4A 448(8)
Classic puzzle rounds. It was the third time sending answer keys of last one or claiming bonus within 1 minute remaining ! Butterflies in my stomach. I was bad at both skyscrapers and TomTom, as anticipated. Unfortunately, TomTom is going to be appeared in Finals.

・5A 511(3)
Hex round and total point is higher than other round. I thought I could remain some puzzles unsolved, but it was necessary to solve Pillen and Hexiom because I expected my 6th high point would be at least 420. So, at first, I attacked Hexion, and fortunately I could solve it within 10 minutes. After that I solved Pillen and other puzzles leaving Skyscrapers till last.
Hex theme is good, but I question the weight on Hexion puzzle (also Star Battle on round 3) because it requires just trial and error or luck.

・6A  228(71)
At first, I tackled Scrabble, because it was necessary to solve it to get more than 420 points. I couldn't solve it using more than 20 minutes. After that, I gave up Scrabble and solved the other puzzles, but I was in a bit haste, I mistook Nurikabe. I was really bad position, but I didn't take care of it because it was the result of my plan. I think Word Search is too hard for points.

・7A 324(37)
Terrible. I mistook Cipher-Fillomino-Snake because I forgot to check. But I would be only 17th position if I solved it correctly.  I can't find why I was so bad at this round. This is a problem.
After this round, I managed to keep 5th position on total, but I lost almost my saving between 6th position.

・B 4566.4(4)
I didn't participate round 1, and I mistook Tents on round 2, so it's a good result in total than expected. Comparison to that A section left me with a bad taste in a mouth, B section gave me a confidence.

Posted by nyoroppyi at 03:39 No comments:

Posted by nyoroppyi at 01:23 No comments: 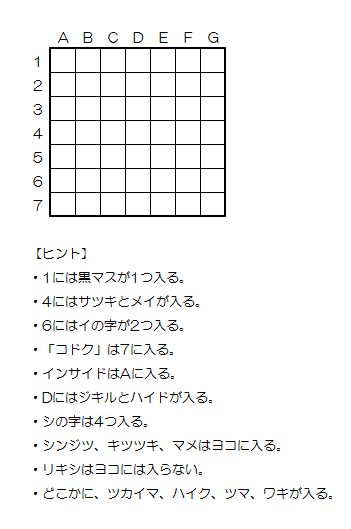 Posted by nyoroppyi at 22:38 No comments:

Posted by nyoroppyi at 22:50 No comments:

Posted by nyoroppyi at 23:30 No comments:

Email ThisBlogThis!Share to TwitterShare to FacebookShare to Pinterest
Labels: Japanese

Posted by nyoroppyi at 23:06 No comments: